The waiting room is a place where time slows down and you seem to have developed a gift where you can actually feel every second of every minute passing by ever soo slowly.  I had to travel interstate and had to take the train .  Five minutes before the scheduled departure there was an announcement - the train was going to be late by FOUR HOURS!!!! I cringed at the amount of the time to  kill (I'm not at all patient you would know that if you had read this old post).  I could have slept a little longer but only if I knew.  I headed toward the waiting room while pulling my luggage reckoning how painful and agonizing.  I'd rather walk around the place than sit at one place and wait for hours to pass by.  But I HAD to wait in the waiting room because the baggage was a bit to heavy to carry around.
The waiting room can be a good place for people watchers those individuals who like to observe fellow homo-sapiens.  There's someone brushing their teeth, another reading a book, a group of youngsters just sitting around playing cards or simply gossiping.  I see a lady who has been walking around with a toothbrush in her mouth for the last 10 minutes (Yucks!).  Makes me wonder what is the ideal duration for brushing one's teeth.  I generally finish brushing in 2 minutes, some people can really brush for 15 or even 20 minutes! That lady was brushing her teeth so rigorously that it seems like she wanted to polish them - with that much pressure she could just sculpt them (LOL!)
There is also a couple - seems like newlyweds from the way they are behaving; one is too concerned too much about the other.  You can tell they are newly married because the concern seems newish and fresh.  There is also a lady with a sleeping child.  The child keeps waking every 15-20 minutes (may be is sick).   An old lady who has also bee watching this mother and child walks toward the young mother and advises her...Wait its more like a lecture seems to go on for minutes. The young mother just listens and smiles.  The child wakes up once more and is now crying the mother picks up her baby and tries to sing and swing it to sleep in her arms.  The old lady quietly walks back to her seat - may be her advise was not applied :P
There is also a couple of bickering siblings - 2 sisters.  Can't tell what its about but its just loud noise once in a while and one of them storms out of the room.  Another couple enters the room with their two kids - a boy and a girl.  Looks likes they are twins both are crawling + can standing by holding on to something.  The father puts the bags and the kids down.  As soon as the kids are put down one of them stands up holding the fathers leg and looking up at him as if to say pick me up :)  Makes me wonder if the child was thinking 'Pick me up oh great giant into your strong arms' :P
I just constantly keep looking at my watch hoping the time will pass. Did not want to play music for the fear of running down my battery before I got onto the train - I get really nervous even if its down by one bar! I had a book I tried to read but I almost dozed off - Sleeping in the waiting room can be a bad idea, my worst nightmare is missing a train because I overslept! I had sent a text to a few friends about the train delay and couple of them called back.  Something annoying about this waiting room is that there is no reception an I had to walk out of the room but still stay at the door so I could keep an eye on my luggage.  The only good things about the waiting room is  think there is an expiry to the time we wait there.  The excruciating (largely exaggerated I know but it seemed so) four hours were finally up and I felt this wave of happiness  come over me as I stepped out of the room and little bit closer to my destination. 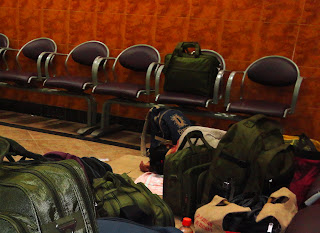 If I had to choose to be any food in the world I'd choose to be a Samosa! I can never ever get tired of eating samosas.  Its one of my 'Happy' food! This article is just to proclaim my love for this food... No stories :P
Today as I left home to go to work as usual but soon as I got out of the building compound I thought I could smell samosas. I looked around to see if there was a samosa vendor nearby.  There's a school next to the building where I live and sometimes there are people who sell junk food / sweets, etc. to the school kids during recess or when they leave. No matter how many years pass there will always be these people outside the school who sell these things :) - I remember the man who sold samosas outside out school.  there was another who sold different flavoured ice-creams and kulfi.  Then there was a lady who sold a sweet (buddi ka baal :P) and sometimes cotton candy in a packet.  During the rainy season there was a man who sold sweet corn / bhutta (fried corn on the cob) and another who sold Guavas with a masala powder. There also used to be a Bhel Puri cart outside school... hmm those were some days! I was a road side foodie since those days (:P hehehe).
Coming back to what happened today... So I was trying to look if I could spot the samosa seller and couldn't see outside the school but I was getting the aroma... they had to be around me somewhere! I spotted a boy carrying a tin dabba on his shoulder with a paper covering and I knew that's where the samosas must be! :) He was walking ahead of me about 12-15 feet away and I could smell the samosas! :P It was like the samosas were calling out to me much like the aroma of cheese pulls Jerry such that he almost floats toward it :P ... only I wasn't floating but you get the point :P

Since he was walking ahead of me I decided to anyway follow him and see where he will be taking the samosa - probably a shop to sell; they smelled really fresh and crispy I had to get one now! So I was walking behind wondering which shop he would enter to sell the samosas, I was getting hungry.  I realized he was taking the same route I do for the train station and was curious which shop he would turn to.  He did not go to any shop.. but he walked onto the station bridge I was wondering if he was going to the other side and wondered if I should still follow him.  What if he was going somewhere a little too far I could miss my train.  What to do.. samosa or train? While I thought I was stuck in a dilemma I noticed he was walking down onto the train platform.. phew! I thought if wasn't going to sell them is any shop I'd just buy them from him before he get's onto the train.  I saw him walking to a stall on the platform and he handed over the samosas to be sold! :) the moment I had been waiting for... I walked up to the stall and bought one (yes just one).  Nobody knew how long I had longed for it and since I had been following the aroma :D the quest finally ended and that samosa brought me a little bit of peace :)

I love food even otherwise but nothing can bring a smile on my face as a fresh crisp hot samosa I absolutely love it! :D I could never ever get bored of eating samosas. Doesn't matter even if I'm on a diet the Samosa goes on the exception list :D Its one of the items I cook well (ofcourse! Just had to learn to make this) Doesn't matter what kind it is - Samose ke maamle me koi bhed bhaav nahi, punjabi samosa ho ya patti samosa sabka swagat hai :)