The Scent of Memory

Email ThisBlogThis!Share to TwitterShare to FacebookShare to Pinterest
Labels: Memories

A Shade of Grey

The world is neither good nor bad; it’s what WE choose to see.  I do believe there is good in every human being and all of us have a dark side as well.  What you get to see might be what the person is showing or what You choose to believe.   It’s also about how much time you spent getting to know that person.  Human beings are very complex creatures and not very easily comprehensible.
Every minute we spend talking, observing and listening to people is like a pixel that is being created in our mind on how we perceive them.  Ever noticed why you are not able to find faults with your closest friends or the ones we love?  Why they seem so perfect? It might be because that picture is very close to us.  If we trying backing up a bit we might be able to see those imperfections, the cracks in the bigger picture.  But friendship does mean accepting people as they are – the imperfections add to their character and that could even be the reason why we love them.  Now trying going back in time and thinking about the time when you first met your friends.  The first few initial encounters might have been pleasant, funny or amusing and you might have come to know about these ‘imperfections’ a little later but by then they were already a part of your life and hence it was accepted with the whole baggage.  It’s not the people were perfect when you met then and something happened later... it’s just that you chose to see the good things and make them a part of your life.  There are also those friends who when you try to think back make it very difficult to really to remember when they transitioned from an acquaintance to a dear friend. These are people who have become a part of your life even without you consciously knowing it, you just realise it someday.
Similarly, we might admire someone from a distance for the way they manage their life and sometimes after getting to know these perfect individuals there are chances you would change your view. (Agree nobody is perfect, but that is not the point here) This is a case where we are looking at a huge canvas from a distance; The big picture looks good but moving a bit closer we see the painting isn’t that great.


So, perceptions and images can change... Depending on the preference of your Grey shade.
Posted by Nikki at 3:50 AM 2 comments:

It is rightly said that humans are social creatures.  We just cannot live alone.  Practically we can but not when it comes to needs - We NEED company, a partner, a friend or a pet; It can even be an idea or thoughts.  Something that can keep us occupied (when you are not thinking about just yourself). Solitary confinement can drive some people insane.  Remember the Tom Hanks in the movie Cast Away? He was talking to a handball! Hence I have arrived at the conclusion that we as humans need objects of affection - the object can be any-thing or person.


For quiet some time now it has been the idea of having my own house that I was totally obsessed with because that would give me something to work on when I’m not working. It is an investment and the thought that I would have my own little haven was very comforting.  But in a city like Mumbai forget dreaming about buying a house- the aam aadmi / insaan (average Indian) can afford to get small studio apartment on a loan that will last for 2 decades.  A house for me was out of the question. So I had a feeling of this void that I was looking to fill with an activity or some little personal project.  This thing about voids is once you know they are there, you GOT TO do something about it else you will end up losing sleep a few nights once in a while.
Today I found my mini project - I rescued a dying plant (rescued makes it sound soo nice).  Its a bunch of bamboo shoots (the kind you get in Feng Shui shops) I found it almost dying in a corner of the office where someone had just left it in a cardboard box to die without water.  I picked it up and got it at my desk, everyone was wondering what I was doing with what looked like a bunch of dried leaves. I trimmed the dead and dried yellow leaves, next I had to put it in the bowl to hold it and the water.  It was difficult to find a bowl in office so I put it in a plastic container in which I had bought some cheese croissants. Filled it with water and placed it in the corner of my desk (below is the pic). This is my new object of affection.  I spend most of my time in office - if I were to count the waking hours spent at work as opposed to leisure activities. Now I have a natural friend keeping me company. 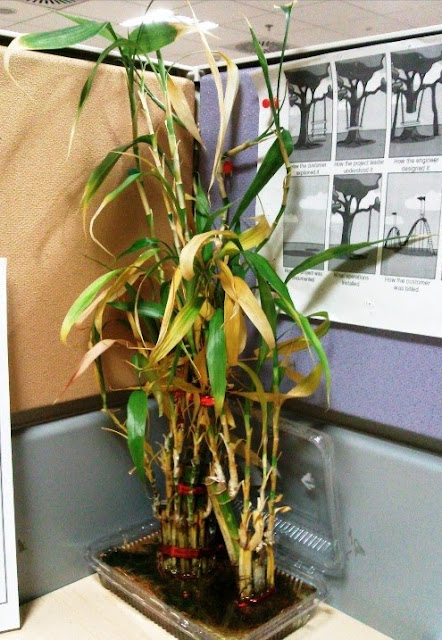